December 06, 2017
Beastmen are vile parodies of humankind, creatures of chaos who hate humans above all other beings. They exist only to bring war, fire and destruction to the world in the name of the chaos gods. Morgoth is held in highest esteem as a shaman by the half-beasts. Some describe his visage as truly horrific, although in truth none can describe it with any certainty. Morgoth walks within the realms of man in tattered garbs covering a suit of bones. He whispers prophesies into the ears of his deformed followers, who bray in anticipation for the fall of mankind.

Well, the first month of the Old World Army Challenge is done, and I painted 15 Bob Olley beastmen and a shaman for a total of 218pts by 4th edition standards. My full post can be found here, but for the sake of simplicity I'm also including some pictures to my blog. Enjoy!

Some closer shots of the models 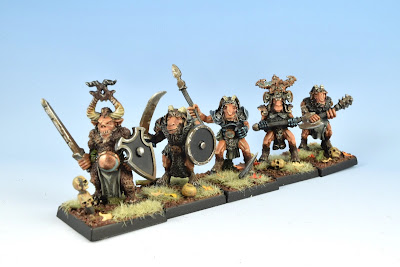 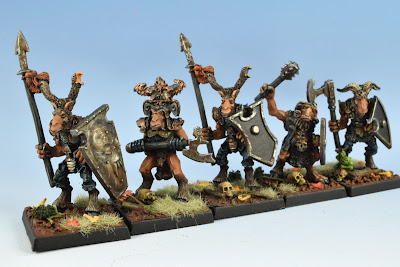 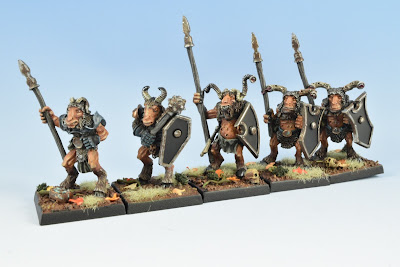 That's all for this month. For December, I will be painting some chaos thugs ...
beastmen Bob Olley Old World Army Challenge Warhammer 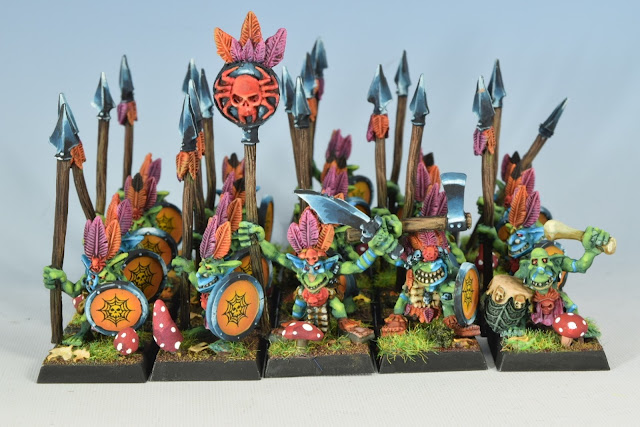 It has taken me quite a while to get a hold of all 20 forest goblins with spears to form a unit, but I have finally gotten there. I painted these guys in two groups of 10, with a color scheme to match the other forest goblins  that I have been working on.  No doubt that this has been a slow-burn project, although I anticipated this from the very beginning. In fact, the forest goblins are the second 'phase' of my 4th/5th edition O&G army based on Kev Adams' wonderful sculpts. The first phase was my my night goblin contingent   which is now almost complete, although it has been 3 years in the making. Good thing about blogging is that you can keep track of this kind of stuff! Cheers again to Mustafa Bekir for the awesome shield decals

Just a short one today, showing some cool orc models I painted recently. One of the reasons I love painting and collecting models from this era is the sheer diversity of sculpts. I quite enjoyed tracking down some of these models just for the fun of painting them. Just like I’m sure many people do, I paint models like these as a ‘reward’ to myself in between more boring painting projects. Helps to maintain enthusiasm and prevent burnout, at least for me Until next time, happy painting! 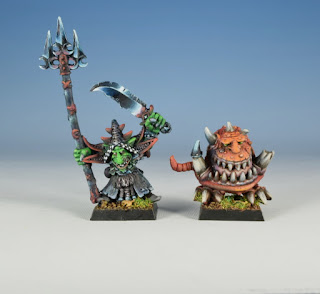 Hope everyone is staying sane and safe. Here is a quick one to keep the hobby mojo going and hopefully provide some painting inspiration to others. The theme of this post is SQUIGS We start with the most famous of his (its?) kind: the fatty, Gobbla Gobbla and Skarsnik. Not sure which one is boss Hop to it. These guys were nasty in 5th edition squig hoppers What I really enjoy about squigs is their description as part fungus, part animal. From the 4th edition army book: "These are hybrid creatures, part fungus and part flesh, with tough ball-shaped bodies and clumsy taloned feet. Cave squigs have huge gaping mouths thronged with slashing teeth, and an enraged Cave Squig can bite a creature clean in two and easily eat a Night Goblin whole" Night goblin squig hunters with squigs For those with a hankering for wholesome squig fun, see the game below from White Dwarf. Never tried it myself, but it seems relatively straightforward as a beer and p