July 10, 2019
A little bit of an eclectic mix this month. First up we have a unit of spider riders. These are going to form part of a larger forest goblin army (eventually..... very eventually). It's a slow burn project, as any goblin army has to be if you wish to preserve your sanity. Since my army is 3rd edition (and forest goblins aren't in it), they are stand-ins for 10 Gobbo Wolfboyz and come out to a total of 110 points.

I quite enjoyed painting them, although painting cavalry is always a pain for me, even in the best of times. I painted the spiders, their goblin riders and the bases separately. The shields will eventually have custom-made decals attached to them, although that is a separate project entirely. 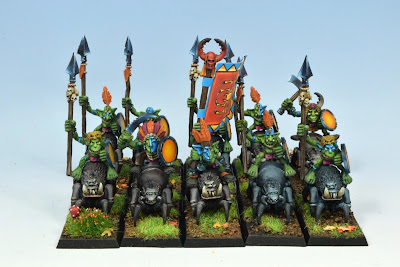 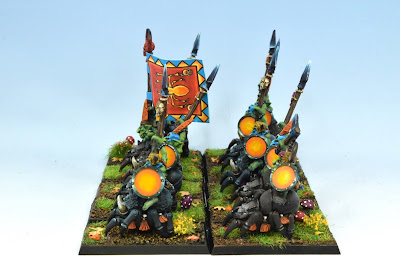 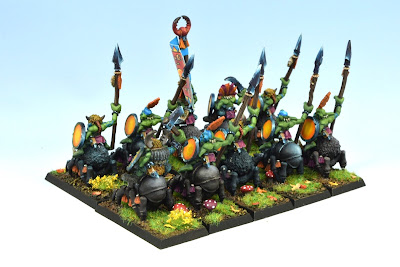 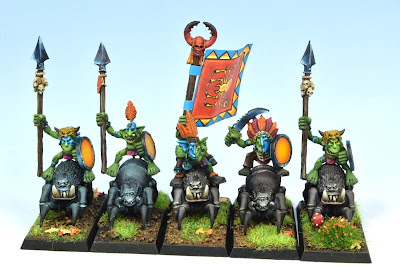 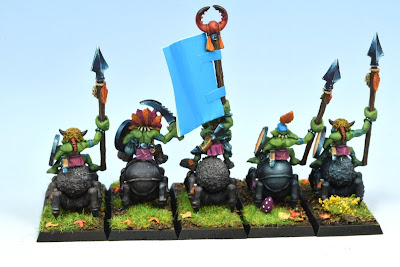 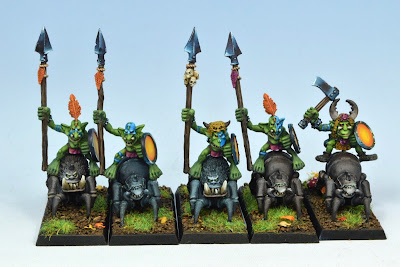 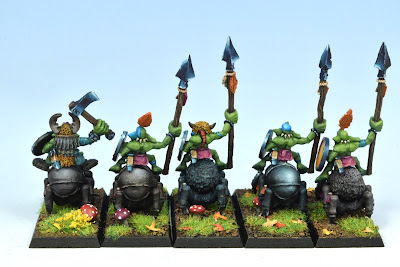 Next, we have an Orc Man Mangler. I've been meaning to paint this model for a long time, being inspired by Kev Adams' amazing paint job on the box art.  Yes, ladies and gentlemen, this model originates from a  time when sculptors painted their own pieces. 1987, to be precise. How things have changed in 32 years!

I initially picked this kit up from a friend, although I soon realized that some of the crew members that came with the model were not part of the authentic crew. As a purist, this simply would not do. Of course, I realized this while prepping the model the month prior to painting it. I was, however, able to find the missing crew culprits on evilbay for a not entirely unreasonable price. 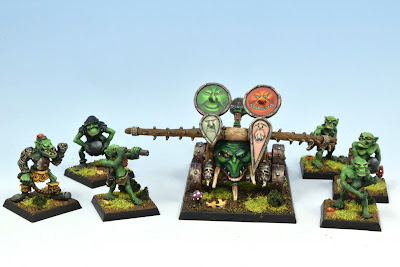 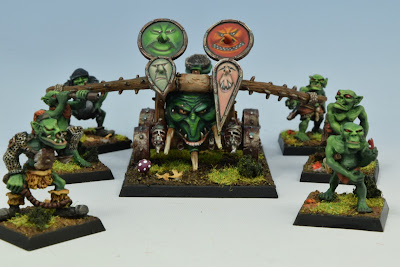 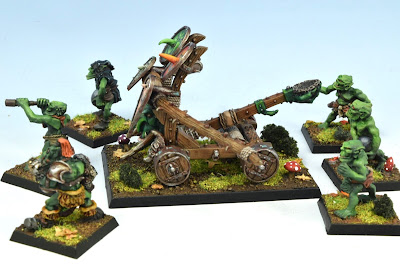 Graglug, chief of the Skull Cleaver Orcs, looked down at the mass of timber, rope and metal before him, and shook his head sadly.
"Been worried about you, Bruglodd," he said, "you're goin' stunty." The other looked up sharply.
"Wotcher mean?" he demanded, "I'm as tall as you any day!"
"Nah," persisted Graglug, "Not stunty, I mean stunty! All this makin' stuff. Ain't right. Not what Orcs do. Bet you don"t even know where your sword is in all that junk."
"I can find it quick enough if you want to make something of it," retorted Bruglodd, "Even if you are the chief."
"But all this stuff," said Graglug, "I mean, what's it for?"
"It's a weapon." said Bruglodd proudly.
"A weapon?" gasped Graglug incredulously, "A weapon? Have you any idea how many clubs and cleavers and skull crumpers and bone snappers you could make with that lot? And you're going to make one weapon out of the whole lot? Daft, you are. You'll never be able to pick it up, let alone swing it."
"Not that sort of weapon," Bruglodd assured him, "A special one. Give us a hand and I'll show you. 'Ere, grab this." A heavy wooden beam was thrust into Graglug's hands, and before he had a chance to protest that manual labour was beneath his dignity as a chief, he found himself lashing it to the framework that Bruglodd had built.
"That's the way," Bruglodd encouraged him, "Now we can put the wheels on."
"Wheels?" echoed Graglug, "You're not thinking, are you? I mean if you need to build a cart to move it about on, how are you going to swing it?"
"You'll see," Bruglodd chuckled, "Just wait." By now a small crowd of Orcs had gathered round, watching the strange spectacle of their chief helping Bruglodd the Fruitcake build the strange construction. Next, Brugiodd bolted a huge and ugly carved face to the front of the structure.
"Looks just like you, chief," he chuckled.
"Watch it."
Graglug clapped his hand over his eyes as Bruglodd dragged from his cave a huge, twisted piece of thornwood, strung with a thick rope
"A bow," he said, as much to himself as to the crowd, "A bowl What the gutsucking good is a bow you need to carry around on a cart? We're Orcs, you know - Orcs not pansy Elves forty foot tall! You'll never get arrows big enough, for a start."
"Not using arrows," Bruglodd explained, lashing the gigantic bow to the framework, "Using rocks."
"ROCKS?" Graglug almost screamed, "Whoever heard of shooting rocks from a bow? Have you been drinking the lamp-oil again?"
"You'll see;" muttered Bruglodd, dragging out the final piece of the structure. It was a beam of wood, almost fifteen feet long, with a huge metal hand at one end. He fitted it to the structure, then tied the hand end to a winch at the other end of the frame.
"Give us a hand, chief." he said, and the hand slowly descended as the two Orcs worked the winch against the pull of the bowstring. Next, Bruglodd staggered out of his cave with a large rock, which he put in the hand.
"Watch this," he said, winking at Graglug *
He cut the rope holding the arm to the winch, and the pull of the bowstring snapped the arm up. The rock flew through the air, landing some distance away with a crash.
The assembled Orcs murmured in awe. Graglug scratched his head, speechless.
"Saw some humans using one once. Mangle-something-or-other, they called it. Wotcher reckon?"
"Could be handy," conceded Graglug, "If you can get some boys to work it. Still reckon it's stunty stuff, though."
"Look at Notlob," argued Bruglodd, "Having those spearchuckers didn't do 'im no harm."
"'Spose so," agreed Graglug, "So what's it called again? Man-mangler?"
"That"s near enough," said Bruglodd. "That"s what it"ll do, anyway."
"Yer," said Graglug, slowly warming to the idea, "Nice one. Got another job for you now, too."
"What?" asked Bruglodd eagerly.
"You can get that rock out of my 'ut and rebuild it - NOW!" 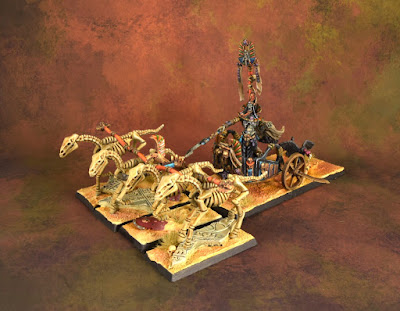 I decided to take the re-basing plunge a few weeks ago. Why? Well, I don't buy much from Games Workshop any more, but when I saw the new Katakros model from the Ossiarch not-Tomb-Kings army, I just knew that I had to paint him up to join the army. He would fit in perfectly. I glossed over the rest of the new range, since I didn't really fancy anything else. Not to mention, the model scale is completely off nowadays.

I started by ripping all of the models off the old bases and started over. The foundation of the new bases is Vallejo Desert Sand, a gel-like material with fine granular particles. Many of the bases are embellished with pieces of temple ruin I made with Sculpey firm grey clay an… 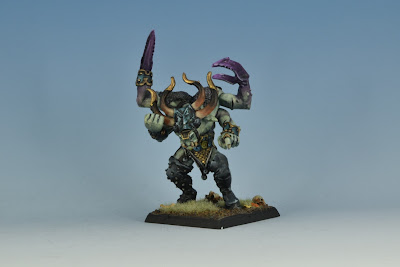 A few days ago I posted up some pictures of my Khorne daemons, so it only seemed right to balance this with a post of the minions of The Lord of Pleasure. After all, Khorne and Slaanesh have been eternal rivals, and I'd hate to be the cause of any supernatural disturbance in the warp. 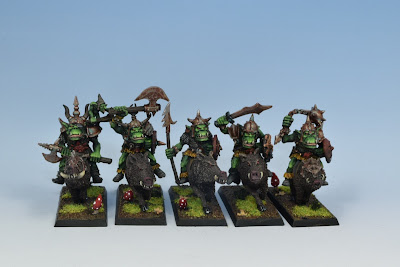 Well, I’m done for March. One of my busiest months work-wise, and remarkably I’m done by the middle of the month. I don’t know how that happened, but I’ll certainly take it. Perhaps my fear of the shame of a mulligan spurred me on to be extra productive. Well, enough psychology, more pictures.
Today I bring you two units. The first is a unit of orc Snortas. These are the elite orc cavalry of 3rd edition. I used the new orc cavalry from Knightmare Miniatures, as they are significantly larger than the marauder orc cavalry and thus more befitting of elite cav. I painted them in the same scheme as my Big ‘Uns (see pic at end of the post).


I’m stark contrast from a size perspective are these fellows. 5 bases of puny snotlings. I intentionally made their skin a different color (the old Snot green color) so that they would look like a different species from their Orc cousins. These are some of my favorite Oldhammer models. The sculpting is not the best, but their comic gestures are distinctly …